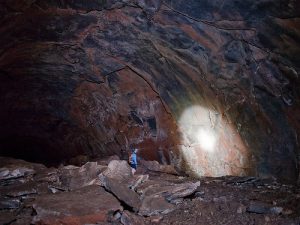 According to credible sources reporting to The Arc Times, scientists in Northern China have discovered a vast volcanic cave system, previously hidden for millions of years, that contains perfectly preserved casts of dinosaurs in various poses, similar to the human casts at Pompeii. The casts are thought to date from approximately the time of the mass dinosaur extinction event, 65 million years ago.

“If this report is true, this would represent a major breakthrough in our understanding of dinosaurs, ” responded Dr. Morely Reflect of the International Association of Paleontologists, “It seems too incredible, but there has been some previous evidence for volcanic fossilization. We shall have to see if this report truly pans out, and is so, every paleontologist will want to observe this first hand!”

The report sources are known to be reliable, but Chinese authorities have yet to respond to requests for further information.

Previous Post: Ancient Engravings Found in France Are 38,000 Years Old
Next Post: How NASA Plays The Odds With Asteroids That Could Kill Us